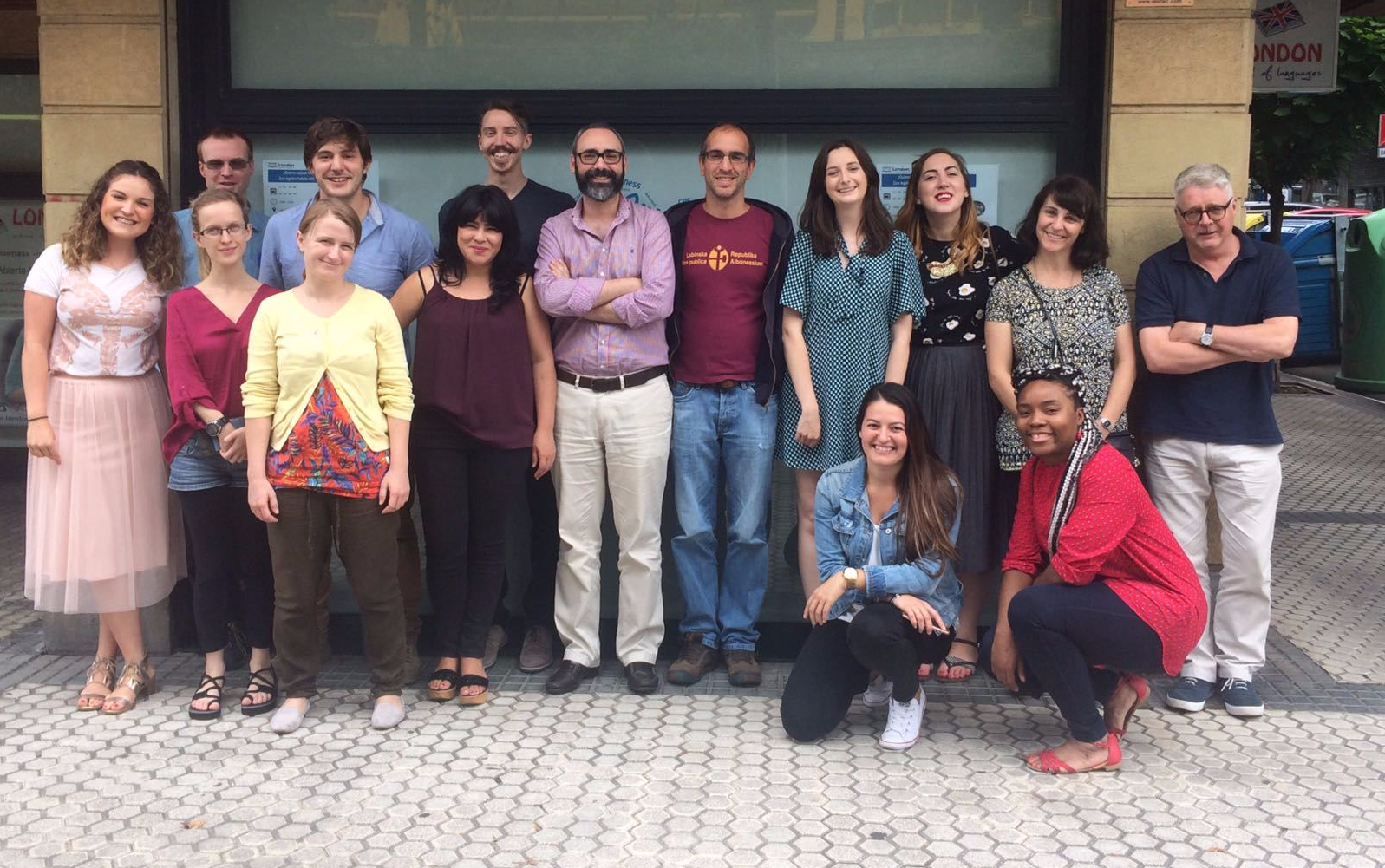 So, it is two weeks after completing the CELTA Course and I am sitting outside my tent and starting to look back.

It was strange to finish the course and be left with a feeling of ‘well, what next?’  I was very lucky to have done the course with a really great group of people and I can honestly say that I have been missing them a lot over the last two weeks.  Also, after the intensity of class planning, reviewing notes and writing assignments, the first few days were just catching up on sleep and feeling a little lost with the free time.

The road to CELTA

Doing a ‘formal’ training course was something I had been thinking about for sometime.  At the last few annual British Council Bilbao teacher conference events I had spoken with a number of people about training options.  Finally, I decided to approach London School of Languages at their own April ELT conference in San Sebastian this year.  At the event I got to speak with Steve Haysham, a CELTA assessor and examiner, who works with the centre.  A month later I was being interviewed by Iñgio Casis, their Director of Studies and CELTA tutor.

I think that one of the most important things I did as preparation was as a result of the conversation I had with Steve at the conference.  Steve highly recommended Jo Gakonga’s ELT-Traning.com website, with it’s Grammar for Teachers course and the CELTA Toolkit.  These online video training courses really helped me to brush up on my grammar and also gave me a good awareness of the terminology and concepts that would be discussed during the course.  I firmly believe that completing this course gave me a very good foundation to build on during the course itself.

The second thing I did in preparation for the course was to complete the Cambridge pre-course task pack which was sent out by the centre. This provided a useful review of a lot of the content from the ELT-Training courses.

After securing my  place on the course, I attended the Spainwise North careers fair in Bilbao where Shawn Redwood from Cambridge Assessment was giving a workshop on the CELTA course.  this highlighted the structure and assessment process of the course and Shawn pointed out different aspects of ‘professionalism’ which he felt got over looked by CELTA trainees.  Finally, just before starting the course I detailed my preparation and feelings in my Countdown to CELTA post.

Day 1 and my CELTA routine

“…day one was straight down to business: the first assignment was set and we were told to prepare to teach the following day.”

During the course itself, well, day one was straight down to business.  After some ice-breaker activities, we observed our tutors teach the students and then the first written assignment was set and we were told to prepare to teach the following day.  Day two and after we had taught the students in the morning, yet another written assignment was set.

From the start of the course a fairly regular routine followed with planning and preparation in the morning after arriving in Donostia (usually at about 07:45) and then observed practise / classes from 10am until 12:15pm.  After a short 10-20 minute break it was feedback time from the tutors and then a quick dinner break.  The afternoon was for ‘input sessions’ from the tutors.  These usually finished between 4 and 5pm and were followed by class planning and assignment preparation until just before 7 when the centre closed.  After the bus ride home and an evening meal it was back to either assignments or class planning until sometimes quite late in the evening.  The pace and workload was constant and there was the awareness that we were being observed and assessed both in and out of the classroom.

However, despite the workload there was usually time on a Friday evening for social get together before everyone went their separate ways for the weekend.

“I actually found the written assignments enjoyable to research and produce…”

I actually found the written assignments enjoyable to research, particularly as they were directly related to what we were doing on the course.  The ELT-Training website once again proved its worth with its CELTA toolkit video assignment guides.  I was lucky to be able to reach out to Catherine Hollings from Cengage National Geographic Learning during my research for one assignment.  I had met her and discussed ELT training and development at a previous ELT training event – in fact it was Catherine who originally pointed me towards the CELTA course at London School in follow up emails after the event.  She very kindly answered my email despite being away from the office on her summer break and pointed me towards some of their online author videos relating to TED Talks and The ESL classroom.  These proved to be great resources which provided some really good references in that assignment.  In the final assignment I was able make use of, and refer back to, a recent blog post on this site regarding my plans for continuing my own development following the courses completion.

During the weekends and in the evenings there was a regular source of support and motivation from the other trainees on the course via WhatsApp messages and phone calls.  Also the tutors were available via email to answer specific queries and concerns with prompt replies – even at some quite unsocial hours.

“Scribd.com… …definitely another top tip for anyone planning to do the CELTA course and not wanting to carry around a big bag full of reference books.”

Another useful tool I discovered was the Scribd.com site.  This site has a ‘documents’ archive of user uploads which enabled me to access digital PDF copies of many resources and significantly lightened my rucksack.  Prior to the course I had tried to purchase a second ebook/digital copy of a number of resource text books I had at home only to find the prices for digital copies – when available – were often significant higher than, and often double, that which I had paid for the original physical print copies from Amazon.  The Scribd.com site also offered a convenient ’30-day free trial’ so was effectively free to use for the duration of the course (although the site proved so useful that I haven’t cancelled the trail and have just paid for the second month).  It is definitely another top tip for anyone planning to do the CELTA course and not wanting to carry around a big bag full of reference books. 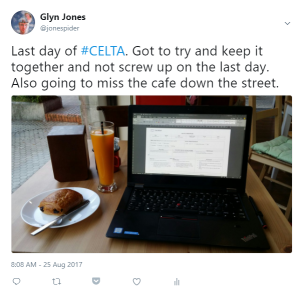 The last day of the course started with teaching in the morning then a trip to a bar with the students from the course.  The afternoon was a short administration session, completing paper work and organising our course portfolios.  This meant that these was no real finale to the course, just finish our admin and done.

Once we did finally say our goodbyes at the centre – several times over – our of group moved on to Tabakalera in San-Sebastian for pizzas, sandwiches, drinks and guitar music.  However, fatigue left me at not my most social.

The week after was results day on the Tuesday, I passed the course with a standard pass grade.  If I am honest, I now wonder if I had tried to push myself even harder in the second half of the course whether I could have achieved the next level up ‘plus’ grade that is so sought after – I will never know I suppose – but I guess that is my only regret coming out of the course.

As for what is next, well I will be at the British Councils Teacher conference in Bilbao in a few weeks time and have already signed up for the next Spainwise event next year as well.  I also hope that I will make it to one of the big conferences, logistically it will probably be the TESOL Spain one in Madrid next year.  I feel that I gained a lot of confidence from doing the course and do not want to deskill so I am hoping to take on more teaching that I did last year in the Academy where I work

My advice for anyone planning to do a CELTA course

So, if you have somehow come across this page while research CELTA or are going to start the course soon then my advice would be

Also, if you are in the Northern Spain, then I would also definitely recommend looking into the centre where I did my course, London School of Languages, in San Sebastian.

2 Replies to “My CELTA experience – It was quite a ride!”